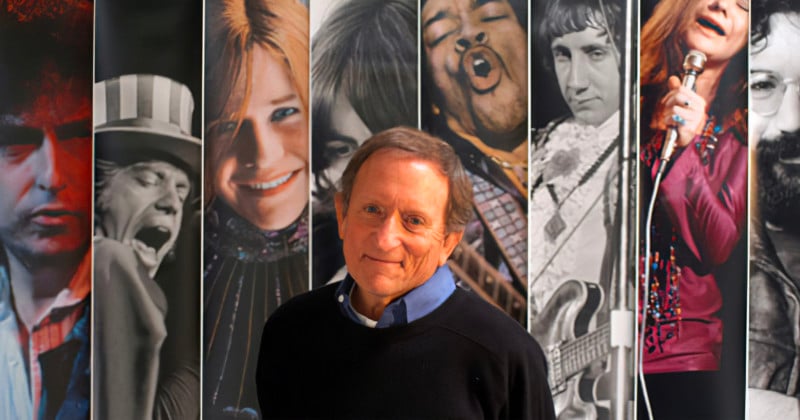 Rolling Stone’s first staff photographer Baron Wolman has passed away at the age of 83. Though known primarily for his work with the rock magazine where he captured some of Rock’s most iconic imagery, Wolman’s photography career was vast and varied.

“It is with a sad heart that we announce the passing of Baron Wolman on November 2, 2020,” Duenzl told the magazine. “Baron died peacefully at the age of 83, after a battle with ALS. Baron’s pictures gave us a rare, comprehensive, and accurate reflection of that time executed by a gifted artist whose visual intelligence is unsurpassed.”

Wolman was responsible for capturing some of the earliest and most memorable images of the “rock and roll gods,” ranging from this open-mouthed Jimi Hendrix image, to this photo of Janis Joplin at home with her cat. Other notable images include Grace Slick in a Girl Scout Uniform, Frank Zappa at a construction site, and Jerry Garcia flashing his missing, chopped off finger.

RIP Baron Wolman, 83.
The first photographer for ROLLING STONE magazine.
It’s like he hypnotised his subjects with his camera. pic.twitter.com/V91nc3AKe7

Wolman began his photography career stationed with the military in West Berlin in the 1960s where he crafted and sold his first photo essay depicting life behind the Berlin Wall. That experience led him to pursue a life as a photojournalist.

In April of 1967, Wolman met freelance writer Jann Wenner and music writer Ralph Gleason, who had been documenting rock bands for a new music periodical that would become Rolling Stone. Wolman joined them after they published their first issue, and continued as the staff photographer for three years. Wolman’s career would be defined by the images he captured during that time.

The 4.5-minute video below documents Wolman’s first visit to his Backstage Pass exhibit, where he briefly talks about his career.

Photographer Baron Wolman, who took some of the earliest and most iconic images of rock & rollers during his stint as Rolling Stone’s first staff photographer, died at age 83.#RIPBaronWolman
📷by Baron Wolman. pic.twitter.com/x0zN4VNcMS

Wolman talks about his experience at Rolling Stone, and specifically about Woodstock, in this 70-minute podcast published in 2019:

Similarly, he participated in a 90-minute interview with Mark Sublette which discusses Wolman’s entire career, from a brief stint into espionage on behalf of the U.S. government in East Berlin through his time at Rolling Stone.

Though he also started his own fashion magazine, Rags, in 1970, learned to fly and had a brief stint as an aviation photographer, started his own publishing house called Square Books, and even diversified his career as a photographer for the Oakland Raiders football team in 1974, his work as the original photographer for Rolling Stone remains his most well-known achievement. In 2011 he released the image-heavy autobiography Baron Wolman: Every Picture Tells a Story, the Rolling Stone Years that detailed his early career.

In 2000, Wolman moved to Santa Fe, New Mexico where he lived out the remainder of his life. Wolman passed away on November 2, 2020 after a long battle with ALS, the nervous-system disease also known as Lou Gehrig’s disease. He was 83.