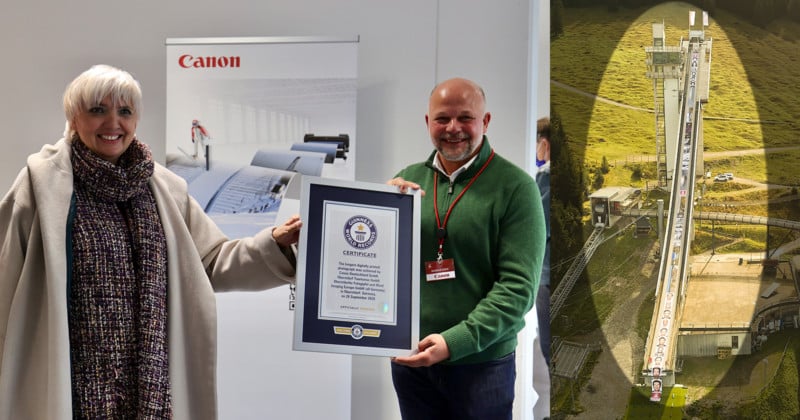 Canon officially entered the Guinness Book of World Records this past weekend by setting the record for the world’s longest digital photo print: a massive 309-foot (109 meter) long collage that was printed at the Oberstdorf Photo Summit in Germany.

The record was set and validated on September 26th, and Canon Germany shared the news two days ago.

“Canon has officially set a Guinness World Records record on the Schattenbergschanze, where the best ski jumpers in the world hunt for records during the Four Hills Tournament,” reads the announcement. “Despite the adverse weather conditions, with temperatures close to freezing point, continuous rain and the first snowflakes this year, Canon managed to print the longest digitally printed photo in the world in front of the jury on Saturday afternoon.”

You read that right: the photo is so long that it was printed and displayed on an Olympic ski jumping ramp.

The print was produced using a Canon imagePROGRAF PRO-6100 large format photo printer—a $10,200 option… in case you’re interested—which was placed at the highest point on the ski jump and made to crank out foot-after-foot of digital image onto a roll of special weatherproof paper provided by Ilford. Helped along by the force of the printer and gravity, the photo simply slid down the ramp as it was printed.

The final print, which measures exactly 357.7 feet (109.04 meters) long, features a collage of landscape photographs and portraits of citizens and celebrities from Oberstdorf, as well as sports and historical photos.

Following the photo summit, the individual images on the single print will be divided up so that they can be auctioned online to raise money for charity.