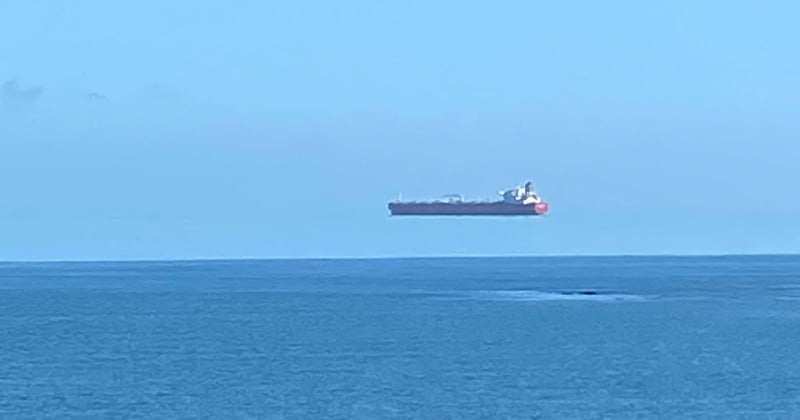 A man was taking a walk this week along the U.K. coast when he was stunned to see what appeared to be a large ship floating across the sky in the distance. His remarkable photos actually show an optical illusion caused by a rare “superior mirage.”

52-year-old businessman David Morris was strolling along the shore at the village of Gillan in Cornwall on Thursday when he noticed the bizarre sight. He was able to pull out his smartphone and snap a series of photos of the flying ship before the phenomenon passed.

“The images appear to show evidence of a phenomenon called fata morgana,” a spokesperson for the UK’s Met Office says. “A rare and complex form of mirage in which horizontal and vertical distortion, inversion and elevation of objects occur in changing patterns.

“The phenomenon occurs over a water surface and is produced by the superposition of several layers of air of different refractive index.”

When you stick a straw in a glass of water, it can look broken because the light from the straw is bent by three different mediums (and refractive indices) of air, glass, and water. The same principle is happening in Morris’ photo with layers of air that bend light differently.

“Superior mirages occur because of the weather condition known as a temperature inversion, where cold air lies close to the sea with warmer air above it,” BBC meteorologist David Braine tells BBC News. “Since cold air is denser than warm air, it bends light towards the eyes of someone standing on the ground or on the coast, changing how a distant object appears.”

You don’t see this off Falmouth every day! 😲#mirage #falmouth#cornwall pic.twitter.com/XvGr5s3rtz

These types of mirages can make ships in the distance look like they’re floating above where they actually are, but they can also make ships below the horizon visible when they ordinarily wouldn’t be. Braine also notes that superior mirages are more common in the Arctic regions on the planet but can “very rarely” be spotted further south, such as in the UK, in the wintertime.

“I was just in awe of the image in such a lovely part of the country,” Morris says.