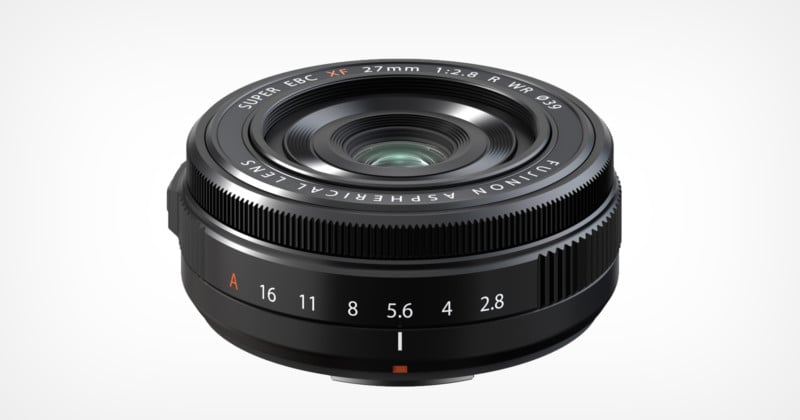 Fujifilm has announced a new pancake prime lens for the X-System: the XF27mm f/2.8 R WR lens. With its main feature being its compact size, the lens still promises high image quality despite its compressed design.

The lens features an aperture ring with an f-stop scale so that you can visually check and adjust aperture without needing to use the viewfinder or camera’s screen, which is likely to be appreciated by Fujifilm users. The aperture ring also features the A (Auto) Position Lock, which locks the lens into the A-Position to prevent unintentional adjustments to the aperture while it is being used. Despite being small, the lens is still weather resistant. Fujifilm says that weather-resistance has been applied at seven locations on the lens to protect against water and dust and allow it to fully operate in temperatures as low as 14°F (-10°C).

Somewhat unusual for a pancake lens, the 27mm f/2.8 ships with a dome-shaped lens hood and hood cap in addition to the standard lens cap. The lens is made up of seven elements in five groups, including one aspherical element which Fujifilm says mitigates spherical aberration, field curvature, and distortion. As a result, the company promises “astounding image resolution” even at its wide-open aperture.

“Since the diameter of the image circle needed to cover an APS-C sensor (28.4mm) is so close in dimension to XF27mmF2.8’s focal length,” the company writes. “The lens produces uniquely high-quality images while boasting an incredibly compact design.”