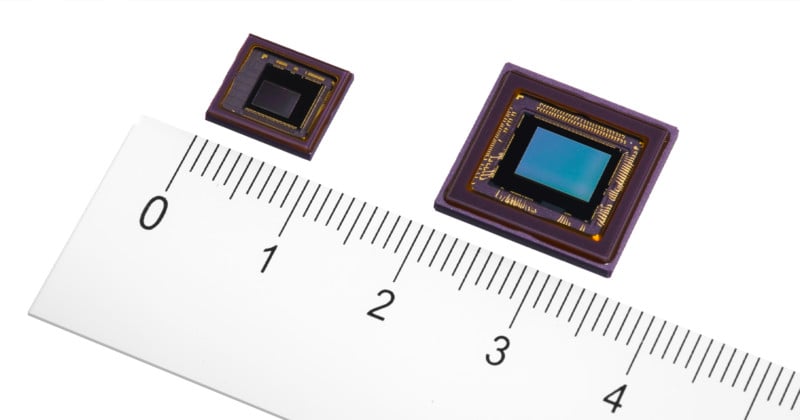 Sony recently published multiple promotional videos for its latest sensors aimed at the industrial space, and while it’s unlikely all of the features shown have consumer applications, some might find their way to consumer cameras.

The four promotional videos featuring industrial sensors, as found by Sony Alpha Rumors, cover the latest developments in the industrial sensor space. Tthe polarization image sensor and SenSWIR/SWIR sensors strongly point to pure industrial use, and it’s unlikely we’ll see much of what they offer in the consumer space.

But the Time of Flight, or ToF, technology is another story: it is already in use in camera modules for smartphones – for example, the Sony Xperia 1 Mark II uses one – and the technology could theoretically be used to improve autofocus in low to no light conditions on larger-sensor cameras.

ToF sensors work by measuring the amount of time it takes for light to go from the sensor to a subject, and back again. The idea of the ToF sensor isn’t new: in fact, it’s quite the opposite. The original implementation of autofocus in cameras before 1986 was done with devices that behave like ToF sensors do today, with one such example in the Polaroid SX70 camera.

The SX70 used a “sonar” autofocus system that was especially helpful in low light, and it’s the first such example of autofocus in an SLR.

Today, smartphones with ToF sensors have them in place for circumstances where other, more conventional methods like phase or contrast-detection don’t work. Phase detection is difficult in low light, especially in the case of having a lot of pixels crammed into a small sensor.

Autofocus technology can always get better, especially when you look at performance in challenging environments. Obviously autofocus today isn’t perfect, particularly given the challenges of low or no light. That can probably be improved, and one such known method for better autofocus performance is ToF technology.

Whether it makes sense as an implementation on sensors with already very good low light sensitivity is another question, though, despite them definitely having made a difference in phones.

It would be rather ironic that such an old idea could be key in improving modern large sensor systems, but it’s certainly possible.

Still, it is important to temper expectations. It has taken a lot longer than some have expected to see industrial sensor developments make their way to consumer products. Over a year ago, Sony released the Pregius line of global shutter sensors for industrial use, which at the time was exciting as it was thought that global sensor technology was close to arriving in consumer cameras.

We have yet to see that technology trickle down in a meaningful way, however.

While digital sensors appear to be related to each other simply because both consumer and industrial products make use of the same general idea, it’s likely that the hope of connecting the dots between technology enhancements in either sector is more complicated than it appears on the surface. While all the incredible development in imaging for industrial applications is driving what appears to be a related technology, it might not be as related as it seems. Only time will tell. Still, all of this is nonetheless exciting.