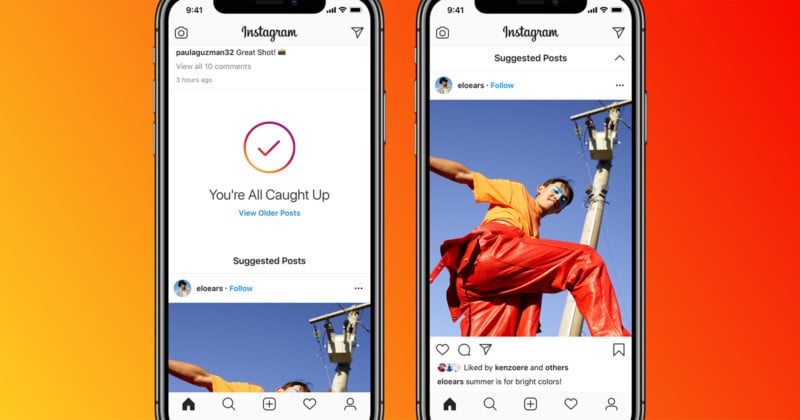 If you use Instagram as a way to view photographic inspiration, you may be pleased to know that the service is rolling out a new “Suggested Posts” feature that brings an endless scroll of photos and videos tailored to your interests.

Previously, scrolling to the “end” of your Instagram feed would display a “You’re All Caught Up” notification before you scroll into older posts you’ve seen before. With the new Suggested Posts feature, older posts in your feed will now be hidden behind a “View Older Posts” link under that notification.

Scrolling down past that notification will now bring you to an endless feed that’s a mix of organic posts as well as ads. For users, the feature is a way to discover new content and accounts to follow. For Instagram, the feature will undoubtedly increase time spent in the app and provide a more lucrative space for ads.

TechCrunch reports that Instagram is backtracking on previous efforts to make its social media service less addictive, presumably due to the rise of rivals like TikTok, which uses algorithms to serve exactly the type of content that grabs its users’ attention for the longest time.

“Our goal is to make it clear when you’re all caught up so you can decide how you want to best use your time,” Instagram product director Robby Stein tells TechCrunch. “We see people continuing to seek out more posts they’re interested in after catching up with their feeds, so we wanted to learn from that and make it easier to go a little deeper for those who choose to do so.”

Instagram says the new Suggested Posts feature is being rolled out now across the world.