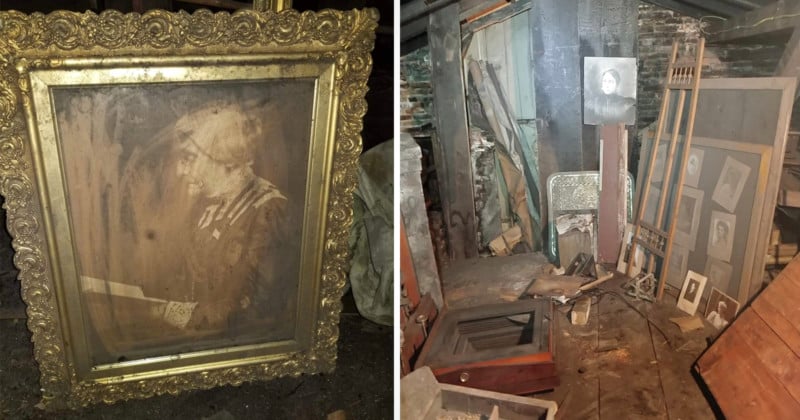 David J. Whitcomb had purchased a building in December 2020 but had no idea what lay hidden above it. After he and a friend noticed an odd portion of the ceiling on the third floor, they discovered an attic full of photographic treasure.

Whitcomb had recently purchased the Geneva, New York building for his law firm, and after noticing that the ceiling looked a bit strange while replacing a light bulb, the two found an access panel and ventured into the alcove.

“The first thing I saw was a whole bunch of picture frames stacked together and these frames are gorgeous,” Whitcomb said to CNN. “They’re the turn-of-the-century, they’re gold, gilded, and they shone really bright and I was like ‘Oh my God.’ “I lowered myself and said ‘I think we just found the ‘Goonies’ treasure.’”

The duo spent 12 hours the following day going through the stacks of photographs, glass negatives, and equipment that is estimated to date back to the late 1800s to early 1900s.

The most notable image is a framed portrait of Susan B. Anthony that was taken by photographer James Hale in 1905. Hale had given the copyright of the photo to The Susan B. Anthony Memorial Association, which later selected the image as her official photograph and sold prints and postcards of it to raise funds.

Whitcomb says he has found mail and other documents linking Hale to the space, leading them to believe that it may have been his photo studio. He is currently searching for the original negative of the portrait but has not yet found it. They did, however, find a portion of a negative that appears to show the flag pin seen in the finished image but fears the rest of the negative may be lost for good.

Most of the subjects of other photos found have not yet been identified, though they believe they have found portraits of both Elizabeth Cady Stanton and Elisabeth Smith Miller, two other leaders of the women’s rights movement.

CNN spoke to Dan Weinstock, a retired doctor and the President of the Geneva Historical Society who confirmed that Hale had moved to the area in 1892 and worked there until 1920. Weinstock was aware that Hale used the third story space of the building as a studio, but knew nothing of the attic. Similarly, the building’s prior owners who had purchased the space in the 1960s were also “dumbfounded” by the discovery.

You can view more images of the space at The Democrat and Chronicle.

Whitcomb is working with a local auction company to empty the entire attic and catalog the findings.