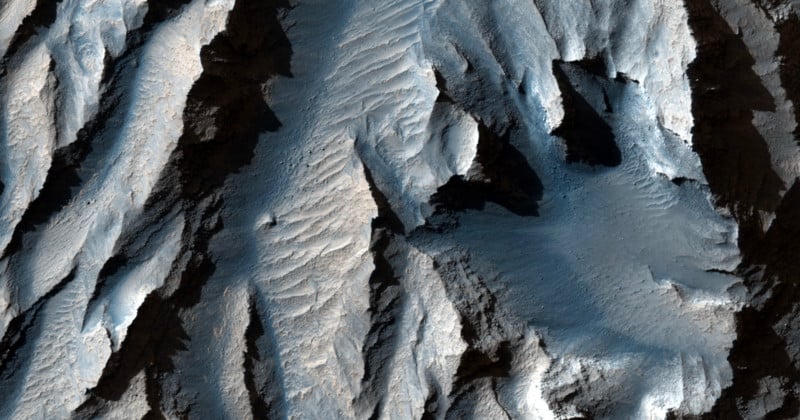 Researchers with the University of Arizona have released a new close-up image of Mars’s giant canyon that was taken with NASA’s HiRISE camera which sits onboard the Mars Reconnaissance Orbiter. These images were captured in an attempt to ascertain the origins of the canyon.

The Valles Marineris canyon on Mars is roughly ten times longer and five times deeper than the Grand Canyon found here on Earth, which makes it the largest canyon in the entire Solar System. While this is impressive, scientists have been unsure of how the canyon formed and have been using the HiRISE camera to capture and study images of the Valles Marineris canyon in an attempt to ascertain its origins.

A leading theory is that the planet’s crust was ripped open by magma billions of years ago. The image below, published by The University of Arizona as part of the ongoing research, appears to support the belief that the canyon was further formed by ice melting into rivers.

None of this research would be possible without the HiRISE camera, which is a massive 143-pound camera that measures roughly five feet by two feet in size. According to Popular Science, it has the ability to resolve something the size of a kitchen table in a shot of Mars’s surface 3.5 miles wide.

Images like the one above are captured using the camera’s high-resolving zooming ability to take closer looks at different areas of the planet to see patterns and variations in the surface that helps scientists determine answers to difficult questions. For example, the researchers noted angular “slashes” in the surface which could point to freezing and thawing cycles. Tiny details like this, only made visible thanks to the HiRISE, are important for the continued study of Mars and to determine if life ever was able to survive on the red planet.