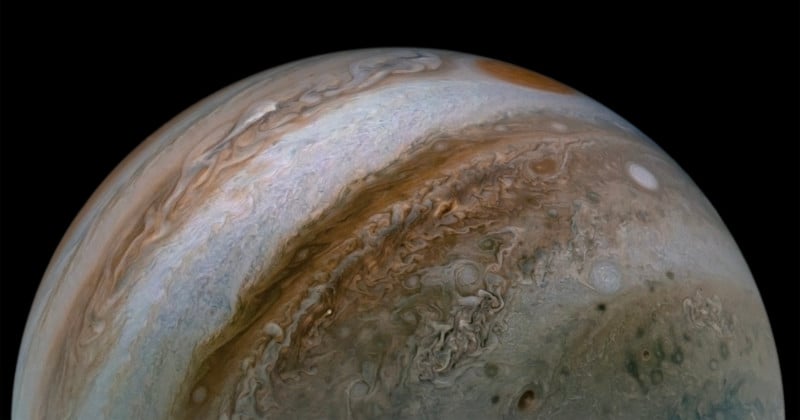 The stunning photos sent back from the Mars Perseverence Rover have made it easy to miss the other beautiful imagery NASA spacecraft have been capturing. One such image you may have missed is this incredible new photo of Jupiter that was captured by the Juno Probe.

Juno is a NASA space probe that orbits the planet Jupiter and was launched back in August of 2011 as part of the New Frontiers program. The probe entered polar orbit around Jupiter in July of 2016 where it has been tasked with a scientific investigation of the planet. Specifically, Juno will look to answer questions about the composition of the planet’s core, its magnetic field, and attempt to determine how much water there is in Jupiter’s deep atmosphere. When it is finished, Juno will be intentionally deorbited into Jupiter’s atmosphere.

This new view of Jupiter’s turbulent atmosphere depicts several of the gas giant’s southern jet streams. The giant storm that is Jupiter’s iconic red spot can be seen in the upper right, nearly rotated out of view as Juno sped away from Jupiter at about 30 miles per second (more than 100,000 miles per hour).

This image is a color-enhanced version of the set of images that the JunoCam camera captured and was put together by citizen scientist Tanya Oleksuik. As noted in the caption, it was “processed using the JunoCam imager’s PJ31 JET S4 raw images and data from NASA’s Juno spacecraft flyby on December 30, 2020. Enhanced to highlight features, clouds, colors, and the beauty of Jupiter. Artist’s impression – not representative of the true color.”

“The original image was taken on December 30, 2020 as the Juno spacecraft performed its thirty-first close flyby of Jupiter,” NASA writes. “At the time, the spacecraft was about 31,000 miles from the planet’s cloud tops, at a latitude of about 50 degrees South.”

You can see the images used to produce this photo as well as all of Juno’s raw images here. The files are available to the public and NASA invites anyone to download them, process them, and upload them for both NASA and fans of space to enjoy. To see what others have done with the files, you can filter public submissions here. There are many images in the public uploads, but NASA specifically featured Oleksuik’s edit, signaling that this image is a particularly good representation of the gas giant’s jet stream and serves as a great example of their newly discovered depth.