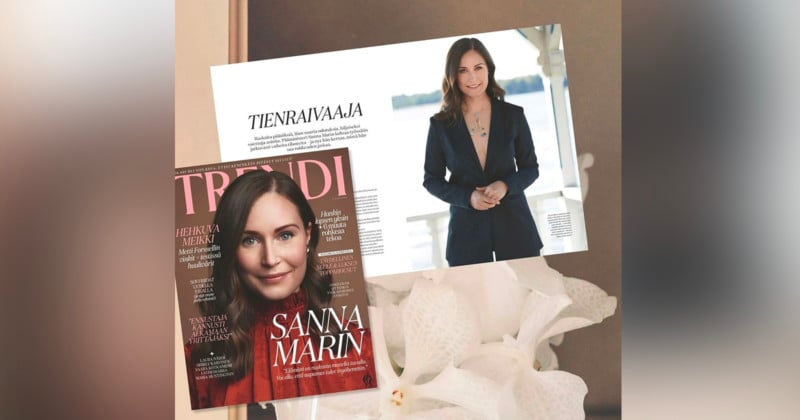 Finland’s Prime Minister, Sanna Marin, became the world’s youngest to assume the title last year at age 34. She has recently become the center of a controversy involving her attire in a photoshoot, with some arguing her blazer with nothing underneath was unbecoming of her office.

According to Mari Paalosalo-Jussinmäki, the director of women’s media at A-lehdet magazine group – the publisher of Trendi, the magazine that featured the photo and story – there was “enormous” backlash to the image. Paalosalo-Jussinmäki says that it received the most visible criticism via social media not long after the issue published on October 9.

The photo, below, was taken by fashion photographer Jonas Lundqvist and done in a style that was common for the style and fashion arm of A-lehdet magazine group. “We’ve had that sort of photo before,” she told CNN. “We have portrayed women in blazers with nothing underneath for years and years, with famous people, and they had never created any response like this.”

The basis of the complaint seems to be that the Prime Minister took time to be the center of a story and photoshoot while Finland is in the midst of a second wave of the Coronavirus pandemic. But though that is the stated reason for the outrage, Paalosalo-Jussinmäki said, “it will be men saying it was wrong, and women saying it was fabulous.”

The harsh critics on one side have been equally met by support by men and women posting their own images in blazers, with the hashtag #imwithsanna. The argument here is that what the Prime Minister wears should not be something at the center of debate.

“I think it speaks of women being tired and fed up with being restricted and told how to act and look and behave, and being judged by their looks – if you’re young and beautiful, then you can’t be taken seriously,” Paalosalo-Jussinmäki said to CNN.

Politicians being criticized for their attire is nothing new. In the United Kingdom, former Prime Minister Theresa May was rebuked for her choice of leather trousers in 2016. When her shoulder was exposed during a session in the House of Commons, British Lawmaker Tracy Brabin found herself at the center of a fashion scandal. Barack Obama was once criticized for his choice of a tan suit.

In all cases, the controversy was sparked over a conversation of “appropriate attire” for a politician. However, that debate quickly shifts: is such a discussion warranted, or an unnecessary distraction? What do you think? Let us know in the comments.