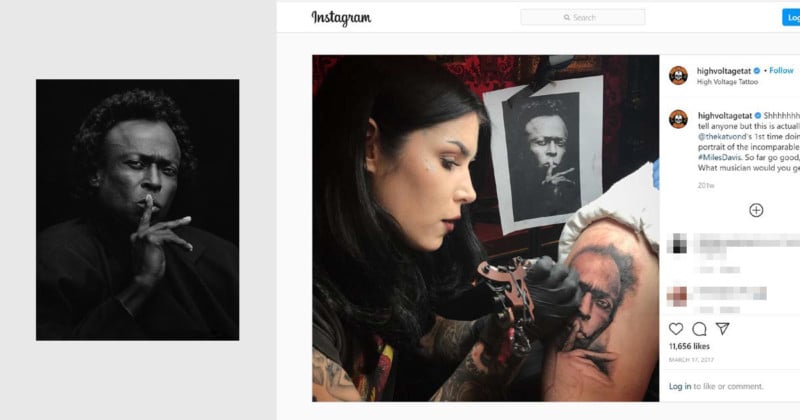 A photographer has filed a lawsuit against celebrity tattoo artist Kat Von D, accusing her of infringing on his copyright by using his photo of iconic jazz musician Miles Davis as a tattoo for a client.

Los Angeles-based photographer Jeff Sedlik created the iconic portrait of Davis in 1989, and the photo was subsequently published in a cover story in JAZZIZ magazine in August of that year. Since then, it has been widely published in magazines around the world, and it was featured by LIFE magazine in a “Pictures of the Year” issue.

Kat Von D is the owner of High Voltage Tattoo in Hollywood, and both she and her tattoo business were made famous by the ongoing TLC reality TV series LA Ink. Kat Von D’s Instagram account boasts over 7.4 million followers.

In March 2017, Kat Von D used Sedlik’s photo to create a tattoo that she drew on a client’s arm. She documented this tattoo on social media, including in a couple of Instagram posts.

The problem is, Kat Von D never requested or received a license or permission from Sedlik to reproduce the photo, which has been sold with a non-exclusive license for reproduction, distribution, and display ever since its creation back in 1989.

Sedlik is demanding that Kat Von D remove all instances of his photo (and the tattoo of it) from all print, Web, and social media platforms. He’s also asking for statutory damages of $150,000 for each work depicting the tattoo (including in promotional materials), profits earned from the photo tattoo, losses incurred by the infringement, as well as other fees incurred from the legal battle.

The photographer tells Billboard that he previously reached out to Kat Von D to settle the dispute out of court, but his efforts to reach an “amicable resolution” were ignored.

“Ms. Von Drachenberg failed to respect the creative work of a fellow artist, and chose to monetize Mr. Sedlik’s iconic photograph for her personal financial gain, exploiting the value of Mr. Sedlik’s photograph to build her brand and to promote the sale of her products and services.”

Whether or not Sedlik prevails may rest on whether the court finds that the tattoo was sufficiently transformative.

“The most likely copyright defense for Von D to assert is fair use, on the theory that her tattoo transformed the original image in some way by altering it with a new meaning or message,” Copyright Lately writes. “Not surprisingly, Sedlik’s complaint refers to the offending tattoo as an ‘unauthorized reproduction.’ But there’s a reason people skilled in applying ink are called ‘tattoo artists’ as opposed to ‘tattoo technicians.’

“While Von D no doubt used Sedlik’s photo as a reference, the process is not as simple as running someone’s body through a photocopy machine. A court may ultimately find that the act of interpreting and translating a photographic image to the medium of skin doesn’t qualify as a fair use, but this is by no means a settled question.”