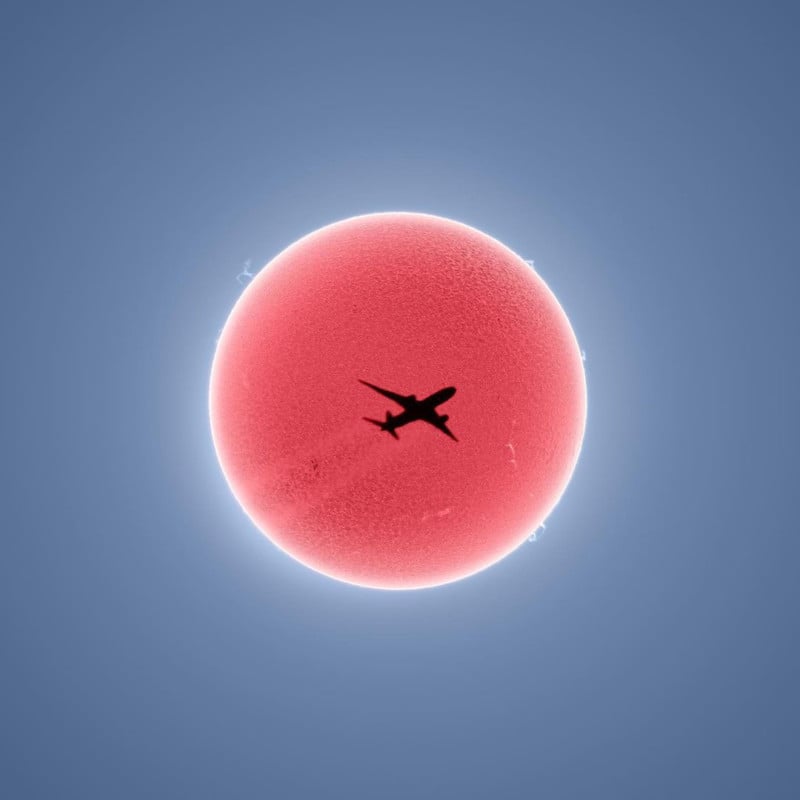 Photographer Andrew McCarthy was shooting the Sun recently when an airliner unexpectedly flew right into his shot. The result was this picture-perfect image of “A Civilian Transit.”

McCarthy was shooting in the afternoon from Northern California on January 17th when this happy little accident occurred.

“When you take pictures as often as I do, the likelihood of happy accidents increases,” the photographer writes. “Completely unplanned, yet it added something to the image that made it uniquely beautiful.”

McCarthy also managed to capture a great video of the transit as well:

I was shooting the sun in hydrogen-alpha light, so as the plane passed you could see the contrails scatter the light from the sun, while the plane was invisible unless covering the disc. This video and the above image are available on my patreon in HD https://t.co/VUjYIQJy0b pic.twitter.com/nMP8I3AOuL

“[N]otice how the plane is only visible when covering the sun, but the contrails are easily visible regardless,” McCarthy writes. “This is due to the contrails scattering the sun’s hydrogen alpha light, which my scope is sensitive to. It creates the illusion of a vanishing plane!”

By searching for the time and location on Flightradar24, McCarthy was able to identify the airplane he photographed as United Airlines 425, flying from San Francisco to Newark, New Jersey.

You can buy a print of “A Civilian Transit” here. You can also download a high-res version of the photo by becoming a supporter of his through Patreon.

Image credits: Photographs by Andrew McCarthy and used with permission