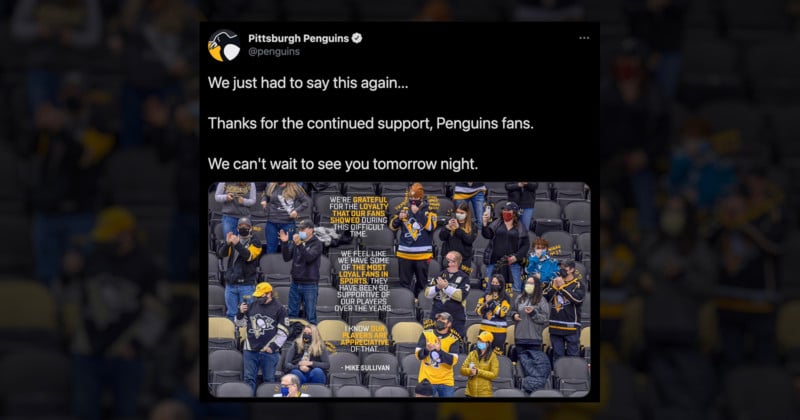 The Pittsburgh Penguins NHL team is facing backlash after one of its staffers Photoshopped masks onto people in an image shared on social media. The original photo featured multiple people either not wearing masks or wearing them incorrectly.

The image and associated tweet were shared on March 3 and were designed to thank fans for their loyalty and support during a time where public gatherings have been either banned or limited in much of the country.

We just had to say this again…

Thanks for the continued support, Penguins fans.

We can’t wait to see you tomorrow night. pic.twitter.com/f3KGjhHWR0

The photo was published after the Penguin’s first game since the pandemic began where fans were allowed back in the stands (Tuesday, March 2, 2021). The issue is that the photo above has been altered, and the original image (by Getty) depicts multiple fans either not wearing masks or wearing them incorrectly.

… three people in that picture have their masks photoshopped on https://t.co/WL961w1bwQ pic.twitter.com/pzMGeGHLG7

The choice to edit the faces and publish the image sparked controversy as many fans point out that it was easier for the team to adjust reality rather than properly enforce mask-wearing rules.

Enforce the mask rule instead of altering the photo. Silly.

Do you guys have any way to enforce mask wearing?

I see you cropped the woman out that wasn’t wearing a mask …. I wonder why lmao. Quality standards

I am interested in coming to a game but let me ask, what are you doing to those who aren’t wearing masks properly??

Following the backlash, the Penguins issued the following apologetic statement:

While perhaps well intended, our staffer should not have altered a wide crowd photo to adjust masks on faces of even a few fans who were not strictly following the rules. Our social media team should never send out altered photos to our fan base. This is a violation of our social media and safety policy, and this staffer has been disciplined.

Penguins CEO David Morehouse also told Pittsburgh’s local CBS affiliate that the organization was happy to have fans back in the arena and most people were wearing masks.

This is not the first time adding masks in post has caused controversy. Last year, Disneyland briefly tested a program where masks would be digitally added to photos of guests on rides if they were not wearing them or not wearing them properly. The company eventually suspended the practice but did not cite any reasoning for doing so.