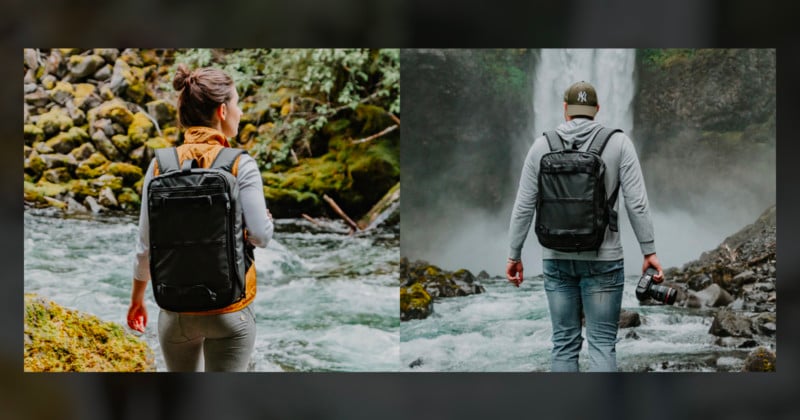 Bevis Gear is closing in on the end of a Kickstarter campaign that has so far raised over $600,000 for the Top Shelf, a camera bag that promises fast, easy access to gear in a way that has never been done before.

Bevis Gear claims that all bags to this point have struggled to create a design that properly allows fast and easy access to equipment while also keeping that gear secure. Its solution is a button clip that the company says it borrowed from the same system used to secure hoods in race cars. While the company assures that this single button will hold the backpack securely closed, it also has included a zipper to even more securely fasten equipment inside the main compartment.

Bevis claims that its design is the first “open-layout sling bag that lets you access all your gear in 1.1 seconds.”

The company says that the “patented sling design” rests like a tabletop on your hip to allow photographers to see and work with their equipment on a clean surface without having to take the bag off.

“Most camera bags require you to put down the bag (sometimes on the ground or dirty surfaces!) and unzip at least three-quarters of the main compartment to access all your gear,” Bevis writes. “With The Top Shelf, you get instant, full-view access to all your gear with zero digging for buried or hidden gear. In one swift motion and push of a button, the sling transforms into a large, viewable compartment where all your gear’s perfectly organized by velcro dividers with endless configurations.”

The Top Shelf boasts multiple pockets on the back and interior of the bag as well as a rain cover and hidden tripod holder. While the straps do not appear to be adjustable to torso height, the company does claim they are padded for extra comfort. Speaking of the straps, the bag can be arranged in both a backpack and sling orientation with the “patented dual-strap technology” that allows it to shift between these two modes quickly and “without compromising style.”

Matt and Nycol Bevis, the brother and sister duo who founded the company and created the Top Shelf bag, say that the biggest pain point for them in bags that was not being addressed with options on the market was accessibility.

“As every photographer knows, the perfect moments or shots don’t wait for you to get organized,” the duo writes. “We devoted all our free time and obsessed with designing a bag with the same quick-action ability as a sling bag, but easier access and organization for your lenses and gear.”

The two say that the prototyping and field testing of the bag took five years before they were ready to present it on Kickstarter. They also say that their partners in Vietnam have made some of the world’s top backpack brands for the last 40 years, making them perfectly suited to tackle manufacturing of this new backpack.

Bevis Gear plans to retail the backpack for $300, but the remaining early-bird prices on Kickstarter bring that down to $230 or lower during the campaign. You can see that and other backing options here.

The Top Shelf bag has raised well over $600,000 with over a week left to go on its Kickstarter campaign. That level of support (over 2,300 backers) is extremely unusual for a previously-unknown manufacturer with no history of manufacturing or successful crowdfunding endeavors. When the campaign ends, the two hope to deliver finished bags by June of this year.

Disclaimer: Make sure you do your own research into any crowdfunding project you’re considering backing. While we aim to only share legitimate and trustworthy campaigns, there’s always a real chance that you can lose your money when backing any crowdfunded project.