In-body image stabilization, or IBIS, has become a staple of high-end mirrorless cameras, and companies are iterating at a rapid pace. We learned a little bit about this evolution in a recent BTS video filmed at Olympus R&D headquarters, and now, Fuji is giving us a peek at how its IBIS units have evolved since the X-H1.

The technical deep dive took place during episode #5 of Fujifilm Japan’s “X Lab” video series, in which the company’s engineers and executives talk about the new Fuji X-S10.

While the video is in Japanese, and the auto-translated subtitles could use some serious work, one thing is clear even if you can’t understand a word they’re saying: the IBIS unit inside the X-S10 is absolutely tiny in comparison to Fuji’s 1st generation IBIS that was inside the X-H1, and is even noticeably smaller than the 2nd generation unit inside the not-even-8-month-old Fuji X-T4.

You can see all three modules side-by-side below: 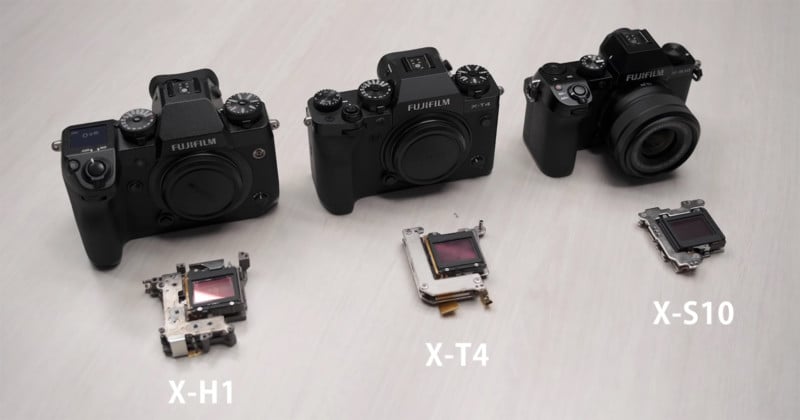 There are two main R&D challenge facing the engineers (at any company) who are trying to improve IBIS: make it smaller and make it better. These two goals are pretty much mutually exclusive. The smaller and thinner you make an IBIS unit, the harder it is to eke out the same level of stabilization in every axis… to say nothing of improving performance.

The discussion in the video up top centers around how, exactly, the engineers at Fujifilm were able to shave a full 30% off of the size of the X-T4 IBIS unit in order to create the version that is inside the diminutive X-S10. And even if you’re not interested in the details, you have to appreciate the innovation involved and what it might mean for the future of in-camera image stabilization.

To see more side-by-side comparisons and dive into the technical challenges involved, check out the full X Lab episode up top. And if you want to learn more about how in-body and in-lens image stabilization actually work, then you’ll definitely want to watch this BTS video by our friends at Imaging Resource as well.