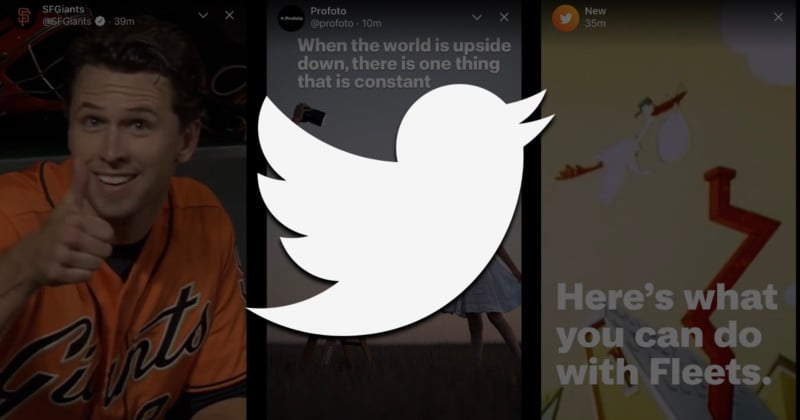 Instead of giving users an edit button, Twitter instead today rolled out a new feature called Fleets. Fleets are a knockoff of Instagram Stories, which are of course a knockoff of Snapchat Stories. Time is a flat circle.

As announced via the company’s blog earlier this morning, Twitter says Fleets were created to give users a way to get around the permanence and public-nature of a tweet. You know, the basic, core feature of the company’s business. Twitter is giving users a different yet extremely familiar alternative: Instagram Stor- I mean Fleets.

A Fleet can contain text, a tweet, a video, or photos. Viewers can react and respond to them based on your privacy settings, but the reactions are very much in line with what we have become accustomed to with how this feature has been rolled out ad nausium across the social media landscape:

That thing you didn’t Tweet but wanted to but didn’t but got so close but then were like nah.

We have a place for that now—Fleets!

Rolling out to everyone starting today. pic.twitter.com/auQAHXZMfH

Fleets are visible to your followers via the home timeline. Fleets are only visible to anyone if they can view your full profile, and if you have open Direct Messages anyone can reply to them.

But some of you tell us that Tweeting is uncomfortable because it feels so public, so permanent, and like there’s so much pressure to rack up Retweets and Likes. That’s why, unfortunately, there are so many 🔥 Tweets left in drafts!

According to the announcement, Twitter intends Fleets to be a place for sharing momentary thoughts, and just like every other iteration of this concept, a Fleet will only stick around for 24 hours.

“Through our tests in Brazil, Italy, India, and South Korea, we learned Fleets helped people feel more comfortable joining the conversation – we saw people with Fleets talk more on Twitter,” the blog reads. “Those new to Twitter found Fleets to be an easier way to share what’s on their mind.”

You would think a platform designed around pithy, to-the-point statements would be as easy a way to share thoughts as possible, but apparently picking up another company’s concept and plopping it hastily into yours was a necessary evolution for the social media giant.

Jfc even excel will have stories soon enough pic.twitter.com/BaBRxmtiwh

Twitter can give any reason it wants to for adding this feature, the bottom line is that they see the success of Instagram Stories and want a piece of that action. And to be honest, as much as I didn’t want this and would much rather have had an “edit tweet” button, I’ll probably use it because Twitter is my personal preferred social media – it’s the only one I use now. I may not have asked for it, I may not want it, but it’s here and will probably be immensely popular. It worked on Instagram for a reason: users like the interface and additional communication channels.

Snapchat is probably still upset that the idea of Stories wasn’t patentable.

With the addition of Fleets, there are a huge number of outlets that now are vying for similar content. Instagram, Snapchat, TikTok, and Twitter will be fighting for your view times and creator’s content, along with YouTube and Facebook. Those latter two platforms have seen much more limited success with the idea than Instagram has, where the Stories feature is wildly popular. TikTok’s entire business model is basically a slightly longer Story.

With so many options crowding the marketplace, it’s likely we’ll see a lot of overlap in the coming months as creators decide which platform is most worth their time and effort.