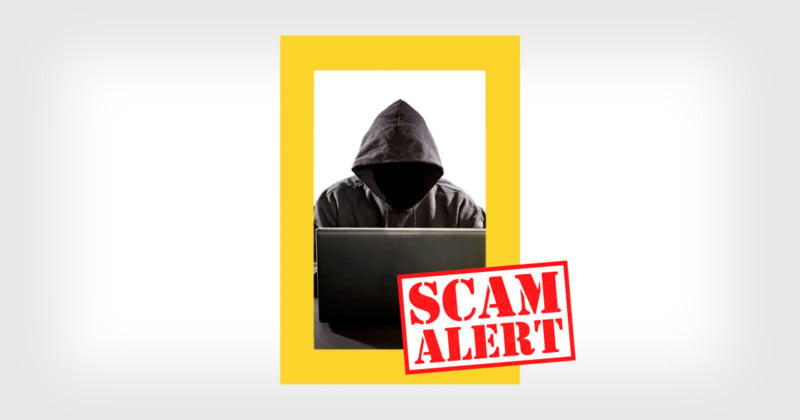 A number of well-known National Geographic photographers have been targeted by an elaborate, high-value scam that involves an invitation to a fake event hosted by a women’s charity that doesn’t actually exist.

The photographers, who included George Steinmetz and Ira Block, received emails from a person claiming to represent a charity called the Women Charitable Trust (WCT) based in Stockholm, Sweden. All the photographers who were targeted are high-profile, internationally renowned shooters — many are household names. The emails offer a significant sum of money plus five free first-class air tickets as part of a free junket in exchange for doing little to no work.

The initial email makes an offer to the photographer to attend the “Economic, Science and Sport Empowerment For Women and Kids Seminar” hosted by the charity. It does not mention any monetary compensation, but it sets the stage for a big payment by mentioning the incidental/expense payments, including the five first-class round-trip open tickets.

Below is a copy of the email the photographers received (click to enlarge): 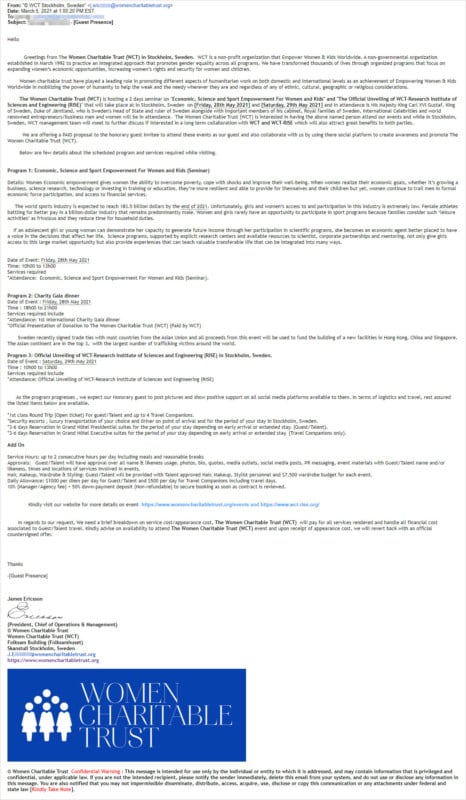 “WCT is a non-profit organization that Empower Women & Kids Worldwide,” the email reads. “A non-governmental organization established in March 1992 to practice an integrated approach that promotes gender equality across all programs. We have transformed thousands of lives through organized programs that focus on expanding women’s economic opportunities, increasing women’s rights and security for women and children.”

Below is another snippet from the email:

The Women Charitable Trust (WCT) is hosting a 2 days seminar on “Economic, Science and Sport Empowerment For Women and Kids” and “The Official Unveiling of WCT-Research Institute of Sciences and Engineering (RISE)” that will take place at in Stockholm, Sweden on [Friday, 28th May 2021] and [Saturday, 29th May 2021] and In attendance is His Majesty King Carl XVI Gustaf, King of Sweden, Duke of Jämtland, who is Sweden’s Head of State and ruler of Sweden alongside with important members of his cabinet, Royal families of Sweden, International Celebrities and world renowned entrepreneurs/business men and women will be in attendance. The Women Charitable Trust (WCT) is interested in having the above named person attend our events and while in Stockholm, Sweden, WCT management team will meet to further discuss if interested in a long term collaboration with WCT and WCT-RISE which will also attract great benefits to both parties.

We are offering a PAID proposal to the honorary guest invitee to attend these events as our guest and also collaborate with us by using there social platform to create awareness and promote The Women Charitable Trust (WCT).

The offer promises first-class round-trip tickets to Stockholm for the photographer and four companions and includes security escorts, luxury transportation, three to six days accommodations at the 5-star Grand Hôtel Presidential in Stockholm, a $7,500 wardrobe budget, and a $1,000 daily allowance (and $500 per day for companions).

This initial letter is signed by “James Ericsson,” who claims to be the President and Chief of Operations and Management for WCT.

One National Geographic photographer who received the initial letter and saw the $7,500 amount for wardrobe, hair, and makeup and immediately concluded that it was an obvious scam.

Another photographer replied to the first email and received the below follow-up that included even more enticing terms: 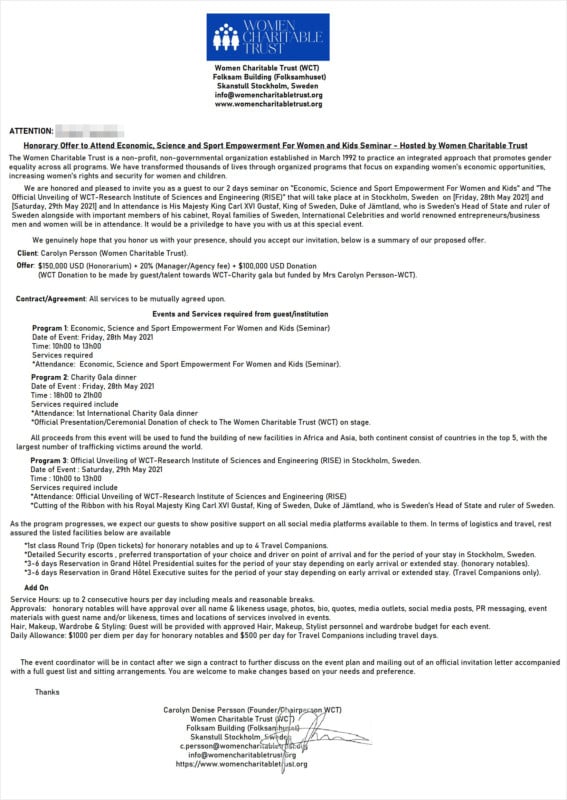 This follow-up email promises a $150,000 honorarium, a 20% fee, and a $100,000 donation. The donation is apparently from a Mrs. Carolyn Denise Persson, and the photographer is asked to donate the stated amount to the WCT charity gala while keeping the rest.

The photographer is asked to attend both events put on by the charity and present the ceremonial $100,000 donation check to WCT on stage at the second event.

“As the program progresses, we expect our guests to show positive support on all social media platforms available to them,” the email continues.

The photographer who responded to this offer spoke to the scammer several times on the phone (the scammer is said to have a Swedish/European accent) and through email. Here’s a personal email he received asking about ordering an autographed book: 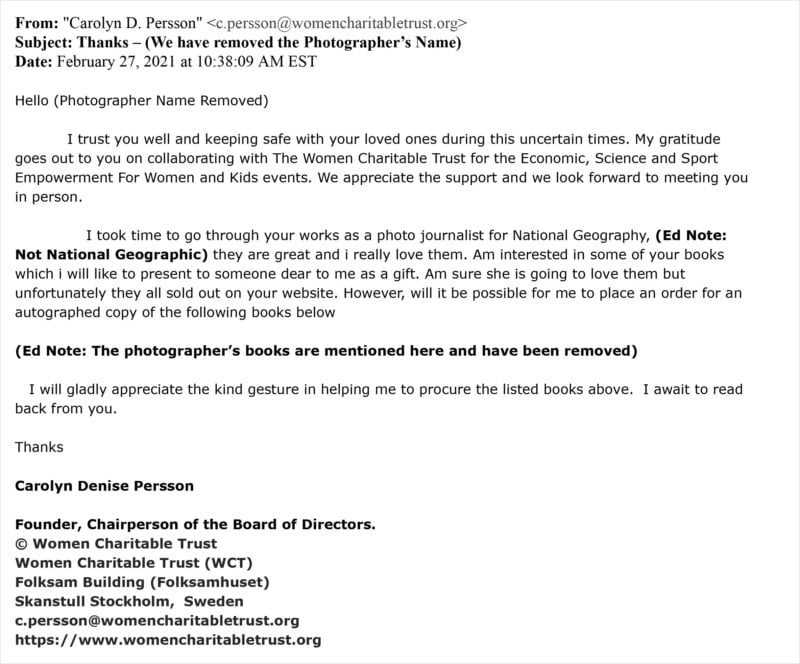 After some correspondence, the photographer then received a $190,000 check, sent from within the US and delivered by FedEx, which he deposited. The instructions specified the $100,000 donation should be sent to a bank in Hong Kong, but the photographer decided to wait for the funds to clear before proceeding to that step. When the photographer checked with his bank a week later, he learned that the $190,000 check had bounced.

PetaPixel has spoken to four National Geographic photographers who have confirmed receiving email solicitations and has been told that other colleagues were targeted by identical letters.

This type of fake check scam is quite common — the scam’s modus operandi involves overpayment and then asks the victim to part with a portion of the funds to someone else.

What’s alarming in this case is that famous photographers were specifically targeted and that falling for the scam would have led to the loss of an astronomical $100,000, versus the hundreds or few thousands that are typically involved in these types of scams targeting working photographers.

What’s more, this elaborate scam went as far as to feature a fake charity at its center, complete with a website that looks genuine enough to fool unsuspecting victims.

Digging deeper, however, reveals a number of red flags.

A search for “Women Charitable Trust” online returns very few results and shows that there are no outsides references to the charity at all. The only two relevant results are the charity’s website and a second website set up for the fictitious research organization WCT-Research Institute of Sciences and Engineering (RISE).

The charity claims to have been established in 1992, but an Internet Archive Wayback Machine search shows that the charity’s website isn’t even old enough to have a record. The first and only snapshot was captured just this week.

Then there’s the webpage for the event the photographers were invited to:

While the other photos featured on the charity’s website are almost all stock photos, this event photo appears to be a rather obvious “Photoshop” of an assembly photo available online.

Finally, Carolyn Denise Florman is the name of the wife of Stefan Persson, the Swedish billionaire businessman who, with a net worth of ~$24 billion, is the richest man in Sweden and one of the richest people in the world. He’s the son of the man who founded the fashion brand H&M.

The inclusion of a famous name tied to wealth is reminiscent of the scam targeting Instagrammer and photographers a few years ago that involved the name Wendi Murdoch (the ex-wife of the media tycoon Rupert Murdoch).

A federal law enforcement agent has confirmed to PetaPixel that his agency has opened an active investigation into this new scam, but exact details of the case are not being released at this time.

If you received this email or know someone who has, please let us know.

Image credits: Header illustration based on photos from Depositphotos